0
was successfully added to your cart.
In the beginning

20 years ago, Doug Mackro had the idea to create a kayak that would come apart, nest to luggage size and go back together to paddle anywhere you could carry it. He didn’t do anything with the idea for 16 years until he discussed it with his new wife, Zinelle. She urged him to follow through and create it! So now, after four years of hard work, we are about to make that concept a reality.

Doug is an avid kayaker who has always been frustrated by loading his kayak on a car and having to find a place to store it, and dreamed of having a kayak that he could have with him whenever he felt like going paddling.

First he needed to find out if anyone else had thought of the idea of a nested kayak. With the aid of a patent attorney, it seemed no one had. With that, he quickly set about the task of preparing a provisional patent application for the US patent office. Once the application was made, he needed to make sure it would work. So, he set out to make a prototype to test the concept. 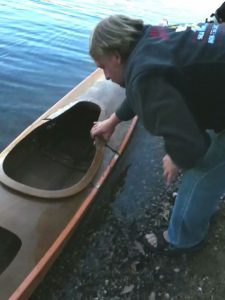 It so happened that one our great friends had broken their home-made wooden kayak that they had just finished making. It broke because it was tied to the roof of their car and one of the ropes came loose and got caught under their tire. The result was a kayak split in half right through the cockpit.

A horrible circumstance for them. But, a blessing for us.

This seemed to be the perfect boat to use for the first prototype. Doug reassembled the broken kayak, then he cut in half, installed a mating surface using an old truck tire inner tube for a gasket, and modified four draw clamps to hold it together. Then, he tested it in the cold April water. As crude as this prototype was, it showed that the concept would work.

And so, back to the basement we went.

With a little more knowledge and a lot more time, we created the first plastic prototype out of one of Doug’s old whitewater boats, aptly named Frankenstein.

Stay tuned for how that went.