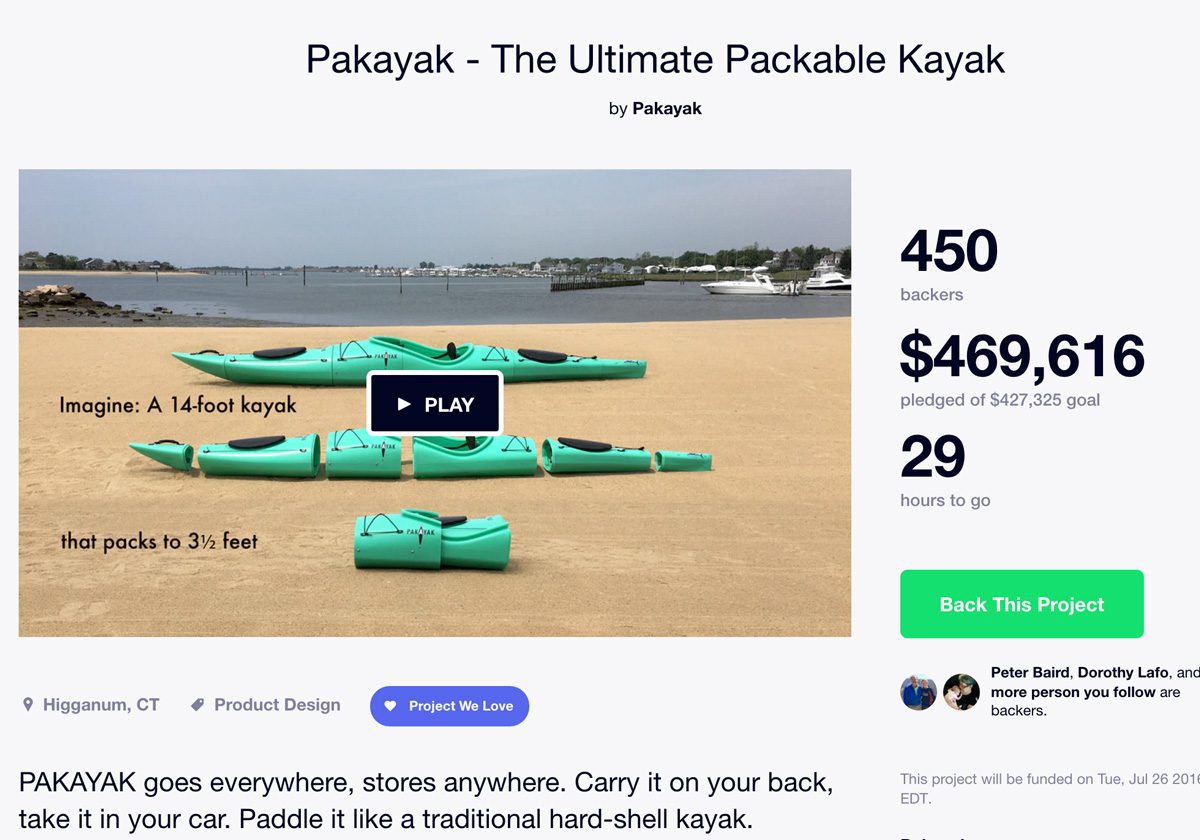 Packable kayaks are a dream come true, Pakayak more than 110% funded with 1 day left to pre-order at reduced rates

HIGGANUM, Conn. – The founders of Pakayak, an environmentally friendly company that produces high performance 14-foot packable kayaks, announced Monday they have surpassed their crowdfunding goal with a little more than one day left in their Kickstarter campaign.

“The amount of support and encouragement we have received throughout this process has been amazing,” said Doug Mackro, CEO and co-founder of Pakayak. “We are so happy and humbled to have our product embraced by so many people, from all over the world. We would like to thank all of our backers and everyone who has helped us along the way.”

At the close of the company’s crowdfunding campaign on Tuesday, Pakayak will begin working to start fulfilling orders for their campaign backers, though the process is expected to take several months.

Pakayak launched their Kickstarter campaign on June 16 with a crowdfunding goal of $427,325 and is now more than 110 percent funded. The innovative packable kayaks have been available for pre-order on Kickstarter, but after Tuesday, Pakayaks will continue to be available to pre-order at Pakayak.com. New orders will be available at full retail price and will be fulfilled in the order in which they are placed, after the Kickstarter pre-orders have been shipped.

Their signature model, the Bluefin 14, is a hard-shell 14-foot touring kayak that can easily be broken down and nested within itself to a size of only three-and-a-half feet. The model’s interconnecting segmented design allows for effortless storage and travel for kayaking enthusiasts.

The Pakayak Bluefin 14 is composed of six interconnecting sections weighing in at a total of 55 pounds and according to its creators, can be assembled in less than five minutes. In addition to its enhanced portability the Bluefin boasts a full list of features including, two watertight bulkheads, a padded folding seat, adjustable foot braces, reflective safety lines, bungee deck rigging and both front and rear handles.

Additionally, Pakayak is fully dedicated to ecological operation and a portion of their revenue will go to programs to help sustain the world’s marine ecosystems. All, manufacturing, assembly and distribution occur at one facility to minimize carbon emission and the company uses minimalistic recycled shipping materials to reduce waste.

Creating Pakayak has been a labor of love for the small team of four who have been working on the project since 2011. The team includes Doug Mackro, Zinelle Mackro, Dayan Moore and Phil Miller.

Officially founded in 2016 and headquartered in Higganum, Connecticut, Pakayak was born out of the desire for a packable performance kayak. The design uses a system of interconnecting sections, which allows for Pakayak’s full-scale kayaks to nest within themselves for effortless storage and travel when not in use. Pakayak hulls are constructed from high-grade resin, specifically formulated for the kayak industry and utilize a system of patented clamps and seals to create a watertight and rigid performance kayak.